For my LGBT family and allies:

Like the chaos created by the Kennedy assassinations, 9/11, and AIDS, the world around us has fundamentally changed because of this election. We will forever talk about the way life was like before the Trump Presidency. Years from now you’ll most likely be telling the young gays in your life what life was like before Trump, what you did to fight the right wing attacks on our community during his presidency, and how we prevailed in the end.

Yes, I really believe that. 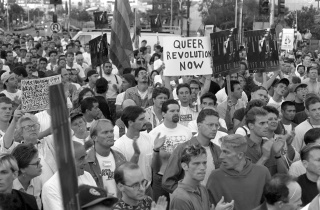 I’m a 51 year old gay man, so I’ve seen a lot of stuff. If you’re lucky enough to be LGBT, or an ally, you can rest assured that your queer DNA has the strength, intelligence, and resources to face whatever is coming our way.

Your queer family tree is bursting with wonderful examples of strength. Let the history of your forbearers fortify your confidence.

Under fire, our diversity bonds together elements to give us superhero-like capabilities. Back in the 90’s one of our religious enemies lamented, “If we do nothing they come out. When we fight them they come out screaming.” Pressure has a great way of helping us make good choices for our gay selves.

For those of you who have never had to fight for your LGBT rights, I’m sorry for what is most likely coming your way. Really, it saddens and angers me. Your elder gays did not want you to be faced with the threat of legitimized bigotry, hate, and violence. We were hoping you’d be spending all your time doing something other than fighting the government.

We thought maybe you’d be hosting fabulous brunches, choosing the perfect outfit to wear to a party, and growing old with your husband. Or maybe you’d be curating queer history, building community centers for queer youth and queer seniors, or maybe you’d be running for President.

But we’re here instead. Who says we can’t do it all? In fact, fighting the fight has led us to where we are today.

Take a look. Here are some pictures I took when we were pissed about Don’t Ask Don’t Tell in 1993. We were some pissed off queens! And rallies like this became a regular occurrence. This was after we rallied for ten days straight, both here in in San Francisco, against Governor Pete Wilson for equal protection at work. All the rallies in this intersection are the reason Councilmember John Duran has often suggested we mark this intersection a historical monument. Perhaps it will become active once again and we can revisit that thought?

Here’s what they almost never tell you about what it’s like fighting for your liberty: It can be scary, but it’s often really fun and centering. You meet good people, many of whom are sexy as hell, and you make the world, YOUR world, a better place for you and those who come behind you.

Check out the boy in the “Fight Back Mary” t-shirt carrying the “ANGRY FAG” sign. I always wondered what happened to him…

Today we are sad, angry, and grieving the outcome of this election. But we are even stronger today than we were when we took on AIDS, Regan, Jerry Farwell, the CDC, the FDA, and many others. We have the experience of our elders and the energy of our youth to draw upon. We are uniquely qualified and naturally inclined to face this.

Take all the time you need to honor your grief, feel your anger, and release your sadness. There is work to do. It will be hard, but you will also cherish the experience. And when it’s over, and we no longer fighting, you may long for a young gay who is willing to hear the story of how you fought and won.

I write about life as a contemporary gay man in Hollywood, CA. I have a passion for spaces where gay men explore their authentic selves and thrive as a result. I'd like this blog to be one of those places. I write and teach yoga. During my life so far, I've been a Mormon, a ballet dancer, a city bureaucrat, an AIDS era survivor, International Mister Leather, and a yoga teacher. All of these journies have informed my philosophies on being human, being gay, and being awesome. View all posts by Mikel Gerle

This site uses Akismet to reduce spam. Learn how your comment data is processed.