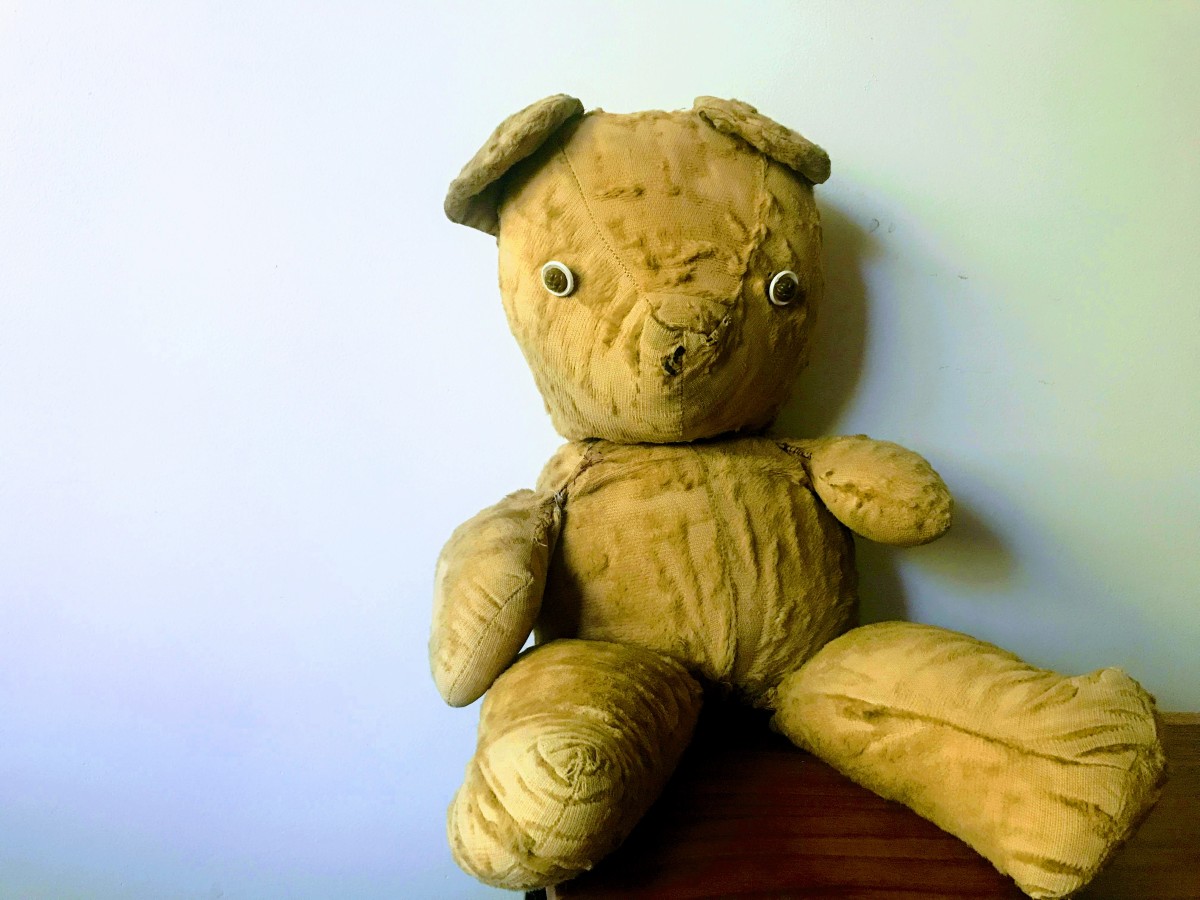 Aside from my birth parents, this is the longest relationship of my life. The fact that it’s a relationship with an inanimate teddy bear does not change the fact that I truly and deeply love this hunk of fabric, fiber, and buttons.

My teddy bear and I met 52 years ago when I was only two years old, shopping with my mom at a garage sale in North Platte, Nebraska. At least that’s what I’m told. I don’t remember. It was 1967 and I was two years old.

Knowing he had already had his eyes and most of his fur loved off of him (at least that’s the story of his haggard appearance that I choose to believe) I felt that he brought important wisdom to our relationship. He had been there for another young boy or girl and was now ready to handle the needs a new little boy, a boy whose parents were about to divorce.

I named him “Ted”, an act of irony I felt was unappreciated by the adults and other children around me.

This ode to Ted was written 12 years ago as a writing exercise. I had recently broken up with a man I was not ready to let go. Using the writing prompt, “who or what was an early love?”

This is what poured out.

Ted, you have been with me for 42 years now.

Your fur is mostly rubbed off and the holes I did surgery on when I was six years old, meant to keep your stuffing inside, have reappeared.

You’re back on my bed again.

Back because Keith left me and went back to San Francisco, back on my bed again because someone has chosen to leave me, just like mom did when I was two.

Were you in my bed back then too Ted?

Smelling like garage dust because we had bought you second hand at a yard sale? It must have been you there keeping me company when my young parents argued and ended their marriage.

Ted, you must have been there in that tiny bedroom I can now barley remember, first door on the right, off the living room in our single wide trailer home.

Ted, you must have been there because you are still here with me today, waiting patiently, if not a little decrepitly, on top of the boxes I store thousands of dollars worth of cycling clothes in. You usually sit facing my new fancy mattress that sits in my new fancy West Hollywood condo.

You sit patiently and wait with unconditional love even though you have been shut away in closets while I lived with Steve Chaison, and Tony Peruzzi, and John Nieto, men who shared my bed for five-year stints or died in a hospital room leaving me no one to come home to except you, Ted.

Ted, you have soaked up tears of a child left behind, have been pushed aside to make way for fucking, you have endured my private shame as a bed wetter, and you have placidly worn satin outfits I made for you out of scraps found in my step-mom’s sewing basket.

You came with me to Tucson to visit Mom in the psych ward. Your presence told her instantly that consoling love had arrived. She pulled you close to her heart and soaked in twenty-five years of reassurance.

She was unhappy when the attendants would not allow you to stay with her overnight, but I was secretly glad to be able to hold you while waiting for her to find enough healing to be released.

You see Ted, between my parents and you, it’s been you that’s been there the most for me.

You were there to calm my 8-year-old nerves when I was alone in bed and monsters in the trees threatened to crawl through the window of our first house on 6th Street in North Platte, Nebraska.

You were there to commiserate with when my stepmom gave her daughter the bigger room and the canopy bed in Cheyenne Wyoming.

You were there when I unpacked the box marked “Mike’s Room” in Pocatello, Idaho after my parents moved (unannounced) from Wyoming to Idaho, couching the information in a birthday card they sent to their son who was five thousand miles away on an adventure picking pineapples on Maui.

Nearly hairless and formless, you have never given up on me Ted.

Your fancy button eyes sewn on by Grandma Derra have steadfastly kept their gaze on me for over four decades. Watching and waiting for my need of comfort to return. Your threadbare head is ready to be nuzzled by your boy. I know you can’t help it that that wire pokes out from your ear and jabs my tender lips.

Nose-less and mouth-less you exist only for my solace, seeking nothing for yourself.

How could I possibly not love you as fiercely as I do?

I write about life as a contemporary gay man in Hollywood, CA. I have a passion for spaces where gay men explore their authentic selves and thrive as a result. I'd like this blog to be one of those places. I write and teach yoga. During my life so far, I've been a Mormon, a ballet dancer, a city bureaucrat, an AIDS era survivor, International Mister Leather, and a yoga teacher. All of these journies have informed my philosophies on being human, being gay, and being awesome. View all posts by Mikel Gerle

This site uses Akismet to reduce spam. Learn how your comment data is processed.